Our project aims to provide the first thorough depiction of drippy blight disease affecting red oaks in the Colorado Front Range. Drippy blight is a striking disease where the unique association between a kermes scale insect and a bacterium contribute to severe tree decline. This research will increase knowledge of the bacterial associate by detecting means of disease dissemination, modes of infection, and determining if the bacteria is systemic. Other investigations will establish the insect host range, detail the life history and biology of the kermes scale insect, and explore the feeding damage to tree tissues. A method to mitigate the spread of drippy blight is also central to this research along with keeping pin oak and red oak as viable planting options.

Life History and Biology of Allokermes galliformis: During the course of this project three expert scale insect taxonomists were approached to provide identification of the Allokermes species associated with drippy blight disease. The present consensus, made in August by Raymond Gill and Natalia von Ellenrieder from the California Department of Agriculture is that the scale associated with drippy blight disease is Allokermes galliformis.

This grant allowed us to complete a second year of sampling to confirm the life history of A. galliformis in Colorado. This kermes scale has a one-year life cycle, and overlap between life stages exists. The developmental stages observed include three female instars, adult females, two male instars, male pupal cocoons, and adult males. A. galliformis shows extreme sexual dimorphism in the adult stage, where larger wingless females mimicked galls and males were winged. First and second instar A. galliformis are orange. Third instar and early adult females become a brown or maroon color, then the protective venter turns tan with three rows of dark spots. Males are a tan color with clear to iridescent wings.

First instars, or crawlers, were mobile after eclosion in September. They moved to protective crevices within the bark to overwinter. Females overwintered in the upper tree canopy. In observed branch samples, they were most commonly found around wounds, growth rings, and bark fissures, but they were also found at bud scars, branch crotches, and around old mother scales. Females overwintered more frequently on older, two to four year old branch growth compared to one year old branch growth. Female scales migrated for a second time upon the onset of new growth in April and May. Over ninety percent of the first instars traveled to the new growth, where they ultimately settled permanently at the growth ring of current season twig.

During the middle of August female scales developed approximately 3,000 eggs, and the number of eggs ranged from around 50 up to 7,000 each. Between late August and early October female scales expired, leaving their hard venters to protect their progeny. This information on life history of the scale involved in drippy blight can be used to develop control treatments targeted at key life stages.

Male kermes scales, which were previously undescribed, were observed to overwinter on the trunk of the tree. Males matured in late June through July when they created white waxy pupal cocoons which were found to be most abundant on the trunk, but were also common on rocks, mulch, fencing, and plants or plant debris around the base of trees. Study observations and collections, combined with scanning electron microscopy photographs, were used in a formal description of the adult male scale.

Lonsdalea quercina Dissemination: Insect collections made on drippy blight affected trees identified 14 species of insects that tested positive for Lonsdalea quercina. These were from three insect orders (Coleoptera/beetles, Hemiptera/true bugs, and Hymenoptera/ants, bees, and wasps) and nine different insect families. About half of the insects found to carry L. quercina were in the order Hymenoptera, which also represented three of the nine insect families (Figure 2). In addition, the bacterium is likely transported between trees by the orders Diptera/flies and Lepidoptera/moths because these insects were observed feeding on the bacterium (Figure 3).

These findings demonstrated a strong role by many kinds of insects in disseminating the bacterial agent involved in drippy blight disease. 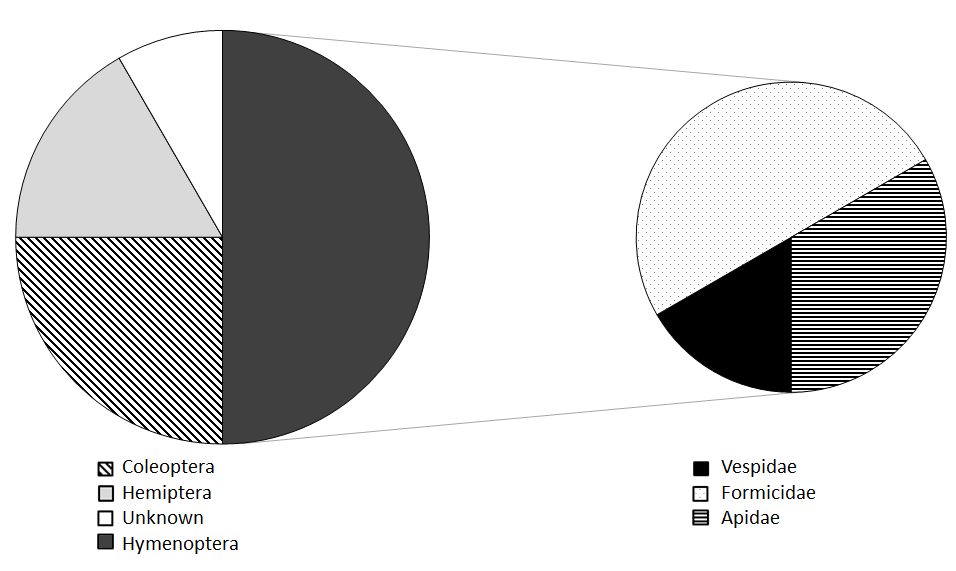 Figure 2. Pie chart showing the (left) the order of insects and (right) the specific families of Hymenoptera (bees and wasps) that tested positive for L. quercina. 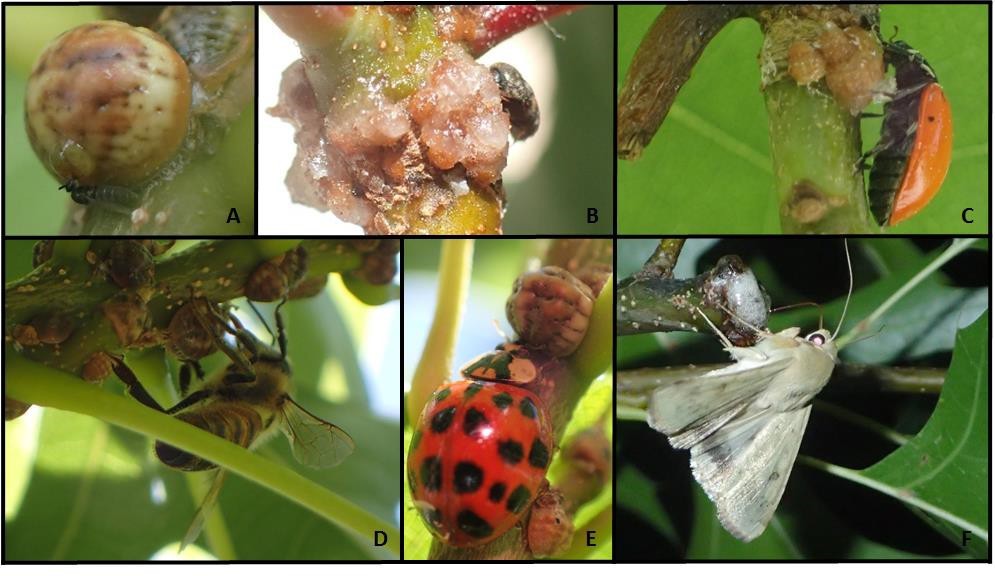 Chemical Control Trial: A study was conducted to evaluate the use of trunk injected pesticides in managing the progression of drippy blight. Included were an antibiotic (oxytetracycline) and an insecticide (azadirachtin), alone or in combination. These two treatments were chosen as they were considered to be the best choice given pesticide restrictions at the site (Boulder, Colorado). Treatments were applied by ISA certified applicator in May, when the nymphs were moving onto new growth.

Description of the Feeding Damage Associated with Allokermes scales: To better understand the type of injury done by Allokermes galliformis, histological samples were developed to illustrate stylet tracks and tissue damage at feeding sites. Several embedded adult scales were sectioned and stained. Images obtained from adult scales indicate the feeding site to be in the cortex (Figure 4). Samples of younger scales on softer woody tissues have been prepared that could allow further study.

Entry and Host Infection by Lonsdalea quercina: Two different methods were attempted to inoculate stems of sapling red oaks with Lonsdalea quercina: a June inoculation using a syringe, and a July inoculation at a scalpel cut. Neither method produced symptoms on the majority of 20 trees included in the study, although two inoculated trees died likely because of the pathogen.

Based on these preliminary studies it is thought that such inoculations be best applied to younger tissues, in spring, which better reflect sites where the bacterial infections are normally observed.

Determination of Distribution and Systemic Movement of L. quercina in Red Oak: This study was set up to determine the distribution of L. quercina within trees and to determine if it can develop systemically or is limited to production of localized cankers. Much of this involved development and testing of techniques for L. quercina detection, which proved difficult. After growing samples in broth, bacteria were recovered from one third of the samples collected from symptomatic twigs and one quarter of symptomatic leaves. No bacteria were recovered from collections of asymptomatic limbs. After this preliminary work, we think this objective would be best met by inoculating young tissues in the early spring and tracking movement from the inoculation sites.