In cities, paved roads and buildings prevent the course that rainfall would naturally take, infiltrating into soil and replenishing groundwater. Instead, rainfall becomes “urban runoff,” causing beach closures, stream erosion, algal blooms and impaired water quality in urban streams. Water sensitive urban design (WSUD) systems capture and treat urban runoff that would otherwise impact ecosystem and human health. Stormwater biofilters are one type of WSUD that rapidly infiltrate runoff to the underlying water table. Biofilters rely on healthy vegetation to properly function. Due to the rapid infiltration of runoff, plants in these systems can be more susceptible to drought and often die during extended dry periods. Trees are particularly susceptible during the establishment phase before roots have grown deep enough access the water table. A type of fungus, mycorrhizae, forms a symbiotic relationship with plants in biofilters and can improve the ability of plants to reach otherwise inaccessible water in the soil.

Our study will evaluate the ability of mycorrhizae to improve plant health in stormwater biofilters during extended dry periods. Among a few herbaceous species, we will inoculate two tree species with mycorrhizae: Melalueca ericofolia (swamp paperbark) and Leptospermum continentale (prickly tea-tree), which are native Australian tree species and common in Melbourne biofilters. We will then evaluate the growth of these plants and growth of non-inoculated plants by measuring the photosynthesis on a regular basis. Based on this test, we will select the most appropriate species for a follow evaluation on the effect of mycorrhizae on improving the ability of immature trees to survive and improve water quality following extended dry periods. We expect that our results will help inform management of trees in biofilters during the establishment phase in areas prone to drought or seasonal dry periods, particularly in Australian cities.

Raingardens are a type of stormwater treatment system that  uses a vegetated filter media bed to provide several benefits related to water quality, flood protection, biodiversity and wildlife habitat, and public amenity. Often, raingardens host a mix of herbaceous, shrub, and tree species, but these plants can be susceptible to drought in the sand-based filter media bed, reducing performance. This problem can be particularly challenging during the establishment period before root systems have matured. Trees may be especially susceptible to drought during the establishment period as compared to herbaceous species. Mycorrhizae are a type of naturally occurring fungi that associate with plant roots, extending access to water and nutrients in the soil in exchange for energy. Mycorrhizae may offer raingarden plants a higher chance of survival during long dry periods, which is what we tested in our project. We investigated various effects of mycorrhizal inoculation on 3 common raingarden plant species in Melbourne-Carex appressa(sedge), Ficinia nodosa(sedge), and Melaleuca ericifolia(tree). We measured plant growth, photosynthesis, and pollutant removal in bench-scale raingardens. We found that plants which were not inoculated (control treatments) grew faster than those that were inoculated on most sampling dates(Figure 1). However, stem growth rate does not always indicate stress tolerance, so we also measured photosynthetic efficiency (Fv/Fm).Photosynthetic efficiency can reveal plant stress when comparing within and between plant species growing in the same conditions. We did find any differences between inoculated and non-inoculated (control) plants in Fv/Fm measurements(Figure 2), so we do not expect that inoculation improves plant drought tolerance in raingardens. 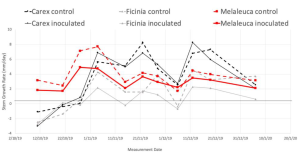 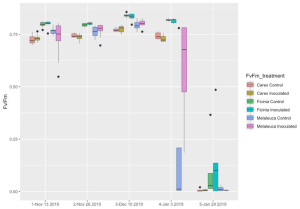 Figure 2.Fv/Fm measurements for all plants over the experimental period. Extended dry periods occurred between sampling dates 2 and 3 and dates 3 and 5. Despite this, plant species did respond differently to inoculation in terms of water quality improvement. One of the sedge species, F.nodosa, removed both total nitrogen (TN) and total phosphorus (TP) better when inoculated, but neither the other sedge, C.appressa, nor the tree species, M.ericifolia, were affected by inoculation with regards to TN and TP removal (Figure 3). Overall, raingardens planted with the tree species, M.ericifolia, performed poorly at removing nitrogen(Figure 3), which does not align with design guidelines[4]. 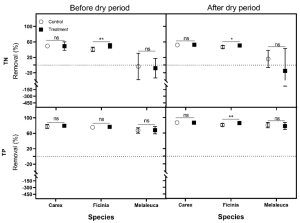 Figure 3.Water quality improvement before and after a 2-week dry period for each species. Removal of total nitrogen (TN) and total phosphorus (TP) is represented as the difference between inflow and outflow concentrations. Overall, we found that mycorrhizal inoculation may not improve plant tolerance to drought, but, for some species, may improve pollutant removal. Future research should investigate more species of different growth types, particularly trees, which may be more susceptible to drought during establishment periods.