Aerated compost tea (ACT) is gaining interest as a nutrient amendment for urban trees. This study examined the effects of ACT, synthetic fertilizer, and deionized water on 15 biochemical properties with two soil types. Significant effects for pH, Mg2+, Na+, C, N, and C/N ratio were not observed among treatments. No differences between dilute ACT (ACTd) at 22.4 kL ha-1 and water were detected. Soil K+ was greater with ACT concentrate (ACTc) at 224 kL ha-1 compared to 30-10-7 fertilizer at 195 kg N ha-1 with A horizon soils. Soil K+, NH4+, and microbial respiration were greater with ACTc compared to water in A soils. Soil P (A soils only), NO3- (Bt soils only), dissolved organic N, microbial biomass N, and N mineralization were greater with fertilizer compared to ACT. Increases in denitrification were seen with ACTc compared to fertilizer and water in the first 24 hours (+4 to +12 mg N2O kg-1), but greater increases were observed with fertilizer at hours 48 and 96 (+65 to +127 mg N2O kg-1). Greatest improvements in soil fertility were observed with fertilization. Minor improvements in soil fertility were observed with ACTc, and denitrification losses were lower with ACTc compared to the fertilizer.

Grant Title: The Impacts of Aerated Compost Teas on Trees, Soils, and the Environment 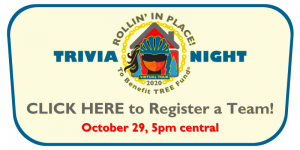 Trivia Night will be held at 5pm central on Oct. 29. Click here to learn more and register a team!