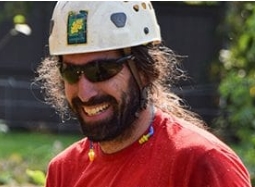 Recent advances in rigging hardware (rigging rings and rigging thimbles) have altered the way arborists perceive how loads are distributed through the rigging system and tree crown; however, little empirical research has been presented on the effect of these systems in practical use.

Traditional rigging hardware utilized a block (rotating sheave) at the upper anchor point in the rigging system; while these devices are efficient at transferring the load through the line, they cause a multiplication effect at the anchor. This inherent feature comes as a flaw when rigging, as the load the anchor point must bear is often close to 2 times that of the actual suspended load.

With the intent to reduce anchor loading, while maintaining repeatable and predictable friction, arborists have turned to rigging rings and thimbles, where the upper anchor point is no longer a rotating sheave, but a stationary ring that provides for adequate rope bend radius and some energy dispersal in the form of heat. While these systems have quickly become popular among rigging arborists and several manufactures have introduced products, there has been little empirical research presented in the literature. Furthermore, little – if any – have tested the products in a situation where the load is allowed to “run”. Rather the load has been stopped abruptly (“snubbed off”) and the impact loads compared against other rigging anchor apparatus tested in the same fashion.

In this project we set out to compare a variety of rigging anchor points in an experimental fashion with a repeatable and consistent method of deaccelerating the falling load (“letting it run”), as is recommended by manufactures and the industry as a whole. This will provide results useable for the rigging industry, with regard to increasing safety and understanding of the loads encountered when utilizing these new systems.

Grant Title: Evaluation of load distribution in removal operations: a comparison of techniques and equipment