2013 | Dr. Alessio Fini, University of Florence
The project is aimed at comparing four different profile designs for parkings lots, sidewalk, and other paved areas. Treatments compared are: A) impervious pavement (asphalt on concrete sub-base); B) pervious (curb on crushed stone sub-base); C) permeable (resin bound pavement on crushed stone sub-base); D) unpaved. In 2011, an experimental plot with these treatments (and 6 replicate) was built in Vertemate con Minoprio (CO, Italy). Two urban tree species (Fraxinus ornus and Celtis australis) were planted in a 1 x 1 m planting pit, in the differently paved subplots in spring 2012.
The project is then aimed at evaluating the effects of different profile designs and soil cover on:
• Soil temperature, which will be measured at 25-30 cm below grade, where most of roots are located
• Soil moisture (v/v), which will be measured at 25 cm (5 cm below the sub-base) and at 45 cm below grade, in order to describe how moisture varies at different depths within the rootzone
• Soil O2 content and CO2 efflux from soil
• Leaf gas exchange (photosynthesis, transpiration, water use efficiency), water relations (pre-dawn water potential) and growth of trees planted in pits surrounded by the different materials
• Air temperature and humidity in the different plots 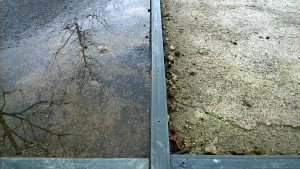 All types of pavements altered the water cycle compared to unpaved soil plots, but this disturbance was less intense in porous pavements than in other soil cover types. Porous pavements allowed both higher infiltration and evaporation of water than both curb and asphalt.

Thanks to previous funding (Project METAVERDE funded by Regione Lombardia, Italy), we built a properly replicated experimental field to allow a statistically-sound description of the effects of different pavements on urban soil and urban trees. In that 3-year project, time was needed for building the plots, planting the trees, and to allow trees to grow undisturbed for at least 1 year prior to starting data collection (measurements conducted in the first year would have reflected response to transplant, rather than to pavements). This resulted in very limited time to conduct measurements which, indeed, were still collected on very newly planted trees, which hold most of the root-system within the unpaved planting hole. The two-year data collection funded by TREE Fund added to a previous two-year study funded by previous funding source, thereby resulting in one of the most long-term experimental studies on soil sealing conducted up to date. This revealed to be of extreme importance, because some effects of pavements on trees became clear after a certain amount of time (i.e. photosynthesis started to decline in F. ornus trees growing in the asphalt treatment after 3 years since planting, and this difference wouldn’t have been detected in shorter-term studies).

Grant Title: Effects of different sidewalk designs on soil characteristics and on the growth and physiology of shade tree species