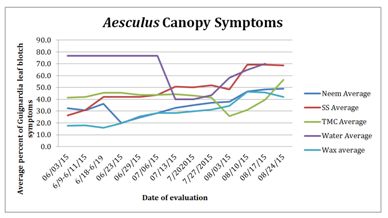 Fungal foliar leaf spots account for many of the diseases that homeowners would like to have managed. Managing these types of diseases can reduce stress, prevent defoliation and maintain aesthetics. Fungicide applications are important services provided by green industry professionals to manage these infections. Due to fungicide resistance building in fungal populations, and being able to offer customers non-fungicide treatments for these problems, finding alternatives to organic and synthetic fungicides is desirable. The goal of this project is to assess three different types of products which have been found to be effective toward similar infections on agricultural 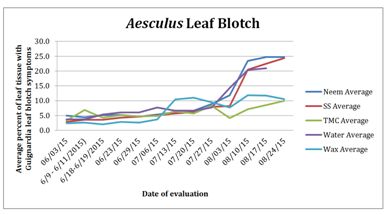 crops and ornamental plants, and that are currently used in the green-industry to manage common fungal diseases. The diseases used in this study may include: apple scab on crabapple, cedar apple or hawthorn rust on hawthorn, anthracnose on oak or maple, black spot on elm and Guignardia leaf spot on buckeye. The products include: a paraffin wax product, a non-ionic spreader-sticker and Neem oil. These non-pesticide treatments will be compared to water-treated control trees and fungicide-treated trees for efficacy. 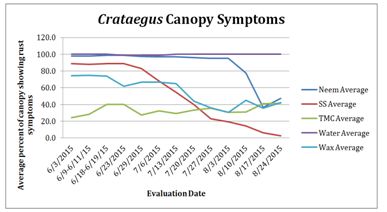 On the buckeyes the TMC, neem, and wax treatments had the lowest amount of symptoms across the canopy (see Aesculus Canopy Symptoms graph) and the TMC and wax resulted in the fewest number of Guignardia leaf blotches on individual leaves (see Aesculus leaf blotch graph). The water-treated trees experienced defoliation in early July, which accounts for the reduction in canopy symptoms. For the hawthorns defoliation and new growth can be seen in the collected data. This is especially illustrated in the Crataegus Canopy Symptoms graph where the trees treated 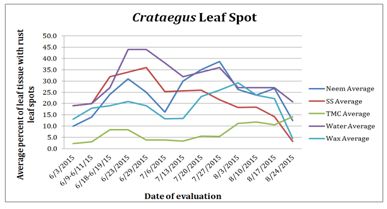 The funding received for this project went towards purchasing chemicals and specialized equipment (spray gun). It also went toward funding an internship for an undergraduate biology student from Elmhurst college, who worked on data collection and organization.